Just a Little Something

Yeah, so Gnorm made me buy some of the Nikki yarn. You may recall I had a great time swatching with it a while back. So, Gnorm and I happened to be at the store on knit night and so there were quite a few folks there and we chatted about the yarn. Still in the first flush of love with my Not Kauni, I had thought that the color transitions come a bit slower in Nikki, so it might make a really neat Kauni. (The colors are also a bit more subtle in Nikki than most Noro.) Or I could make that mitred square thing I keep thinking about. (Any of them, there are quite a few patterns out there.) I mentioned I was making my Not Kauni with Noro and a knitter (whose name escapes me now) led me back to the table to show me her gorgeous Sonnet that she was making out of Noro (Blossom I think).
And an idea was born. As much as I love the idea of a Not Kauni with Nikki, I had been planning to make a Sonnet (I am apparently on a Kristi Porter kick, she's the designer for Intoxicating and Askew) and the idea stuck. 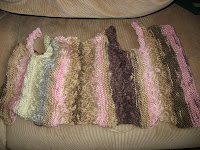 I decided I wasn't feeling very moss stitchy, so i flipped through the stitch calendar and came up with the little cable fabric (which happens to be on opposite side from the moss stitch). Because it is a little cabley, I added a stitch each time I switched to the cable section and took it back when I changed to garter stitch. It will probably still require an edging on the bottom to even things out. Chunky yarn is so much fun. 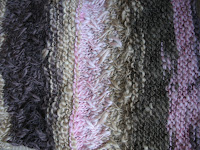 Posted by RandomRanter at 9:12 AM