Well, after realizing that I goofed and used the special yarn for about twice as long as I was supposed to and finally changing, I decided that while the Noro I am using has both green and purple, there is really more purple so the purple alpaca blend I bought was a better choice (I was indecisive in the store) because it would create more subtle striping allowing you to better see the cables (and what would be the point of all that if you didn't really see the cables) so I re-cast and tried it out (leaving the green-green-purple version aside - as yet unripped). I like it better. I apparently can't get through this without messing up the cables at some point - I had to tink back the cable fives since I found I had skipped a cross but, it's looking good. Now my biggest problem is that I have reached that zen level where I knit without looking and blow right by a stitch was supposed to purl instead of knit or the other way around. Fortunately I seem to catch myself before I finish the row at least. 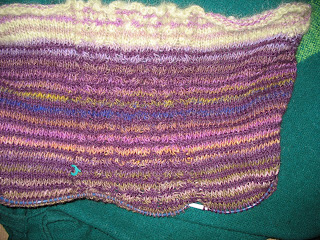 Posted by RandomRanter at 12:56 PM