Last year, as I was still in the first blush of born again knitting, the Washington Post did an article on knitting and included the pattern for the spiral scarf. The pattern was indicated as easy and so I set out in search of the tools and started. First, I bought addi turbos - my first circulars (yay!). They are metal and this pattern calls for an insane number of increases. Quickly I noticed my hands hurting. I kept going. I bought several skeins of yarn in lime green and dark green. (I suspect they did not have enough lime green so I got the dark green to finish out, ignoring the fact that they were different textures and widths.) For this pattern that is not a huge obstacle, but particularly with the lacy-ness caused by all the increases you want to think about where you change skeins and I did not know enough to figure that out. Suffice it to say this pattern kicked my butt. I talked to a more experienced knitter who said that she quickly lost the glow and had used even bigger needles (I was using fifteens) to finish it out. In the end the yarn got hopelessly tangled and sat untended and unfinished.

This year I decided one person on my holiday list was going to get something bigger than a dishcloth. And I thought of the spiral scarf. I figured my improved increasing, my Denise needles, I could make this happen. And I found some gorgeous acrylic/alpaca yarn in my stash (Patons Rumour Hibiscus Heather). And I began. This is one of those patterns that, as long as you know how to increase and be patient, actually is really easy. It is also mind-numbing. It seems as though it should go faster since you knit it from the side. Okay, I have no idea why that would be so, but that's how it always seems to me. And the spirally bit is not visible until you bind off, so just know that it will be there. So, I took a look at the skein as I was debating whether to go up to 800 or 1600 and realized I did not have enough yarn to finish the row I was on. Crap. I was sure I must have bought another skein. I looked - nothing. Okay - I was sure I got the yarn at the local craft store - one of them. I hit the road.
It was of course not at the first one I went to (which was just as well since their lines were crazy). I did not see it at the second one but had the presence of mind to bring in the WIP so I could find a good coordinating color. The Hibiscus Heather is purple, but a reddish purple that looks weird with bluer purples. I did find a fuzzy pinkish Paton yarn that went well and then, on a second pass through I found the yarn! Yay! I bought three skeins, to finish out the scarf, possibly make one for myself, and who knows maybe a coordinating hat. It took almost the whole second skein just to bind off. But as it turned out, with this yarn, 100 stitches is a bit to much to start off with - unless you are planning for something crazy long. So while the original scarf took twice as much yarn as I expected it really made two scarves (see, I'm not crazy). 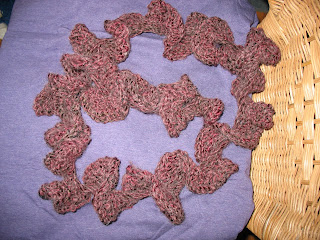 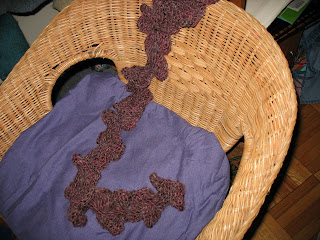 And I did have enough for a hat (where I used the fuzzy yarn as an accent). 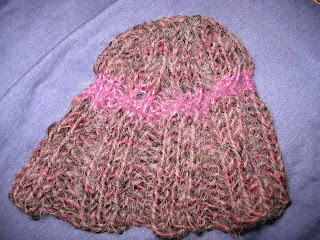 Posted by RandomRanter at 1:58 PM