Kiwi and I have learned enough about each other to know that we are both open for adventure. We ignore basic instructions (such as parts of the pattern) choosing to (accidentally or otherwise) forge our own path. Kiwi has faced fears by not cringing in the presence of my cat. And I - well - I signed up for this challenge.

So, what did we select for our extreme knitting? Our choice involves sharp objects, blunt objects, speed and really determined competitors. And those were just the folks on screen! Kiwi knows I like to multi-task. Knitting by itself can be a lot of fun. But knitting while reading or while watching television is even better.

The danger is of course that I get so wrapped up in the pattern, that I miss what is going on on the screen. For assistance with that problem we are eternally grateful to Mr. Tivo, who has been a great help to us. The other danger is that I get so wrapped up in the action on screen (Stanley Cup Finals, people!) that I keep knitting - missing yo's, dropping stitches, knitting where I should have purled. Leading to what we have been hoping to avoid - frogging (the TAL equivalent of a yield).

But Kiwi was up to the challenge. Fortunately our early progress meant that the front and back have now been joined, so I am knitting in the round. Although the potential exists for me to do seven knit rows instead of four, at least it will look a little better.

So - for game one Monday night - we took the plunge. And it was a success. Our progress was not a swift as it might have been, but we opted for correct progress over fast progress (which is probably growth for me). 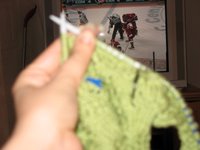 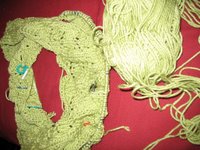 Posted by RandomRanter at 10:29 PM