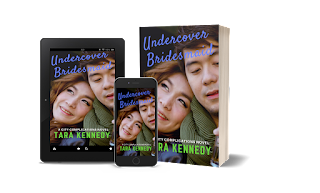 Undercover Bridesmaid - first novel length, but second in the City Complication series is now available in print.  The book can be read as a standalone, though there are brief appearances by Seth - who is a protagonist in Aloha to You, so ymmv on that.
Rafe has been using charm both in and out of work.  Finding himself the only groomsman at a weather interrupted bachelor party isn't going to stop him from having fun.
Felicia has made a living for herself helping out brides by posing as one of their bridesmaids. She's used to handling all sorts of unexpected hitches, but a solo groomsman who keeps showing up at all the bachelorette events is a new one for her.  It doesn't matter if he's hot, Felicia's there to make the bride happy not herself.  Not even if the bride decides a little matchmaking might make her happy.
The book was also my not so secret love letter to pet rescues, and Felicia meets many rescue dogs in between her wedding planning.  And because of the nature of their meeting and Felicia's job, there is travel, a secret identity, and some long distance stuff for them to figure out.
Available at multiple etailers - universal book link: https://books2read.com/u/bwd8BY
And in print:https://bookshop.org/books/undercover-bridesmaid/9781386003878

Posted by RandomRanter at 10:11 AM