It's often tempting to attribute great meaning to how the drafting process of a project went.  But - much like "Project Runway" there are projects that I was sure was the best thing while drafting that I liked less on reflection.  There are projects that were so hard to draft, that I loved when I put aside and then re-reread later.  There are projects that were great but didn't fit what they were meant for which meant changing projects or changing tactics, or abandoning an agreed upon plan.
NaNo is sort of random.  It's a month and a deadline and a community.  But every year some is like why November (there's Camp in April and July), why 50k, why?  And the answer is essentially because. That's what they decided.  You can write more or less.  You can be a rebel.  You can do it in whatever way works for you.  If twitter sprints or discord or zoom sprints stress you out, then don't.  If virtual chats with folks you haven't met stress you out, don't.  Do the things that work and discard those that don't.
So, all of that is to say I wrote this year.  I wrote fast.  I wrote so fast I was constantly saying to folks it's going well so far, but I'm probably gonna crash soon. I said that not because I'm a pessimist but because I know that as a panster there's a tricky balance to writing fast enough to capture all the ideas swirling and yet not so fast that I bonk against the wall because I haven't given the idea well time to refill.  And yet, I did not bonk.  I rolled past 50k and the story kept going.
As a pantser I often don't know when the story will end, and a lot of people find that silly because of course there is story structure and the story ends after the goal is achieved.  And I know that. But well, I often think I'm about two scenes from that and discover I am not.  Some of this of course gets fixed and tightened up in editing.  But well, I kept writing.  And writing.
And I reached a finish.  And it was - for me - a very long first draft.  I hardly ever remember things like description and feelings. All of those are things I layer in, so my drafts almost always get longer in editing even as some scenes get cut.  I have been going through doing some minor touchups so that when I get to really dive into edits I at least won't have to fix gibberish sentences.  (When things are flowing I get very typolicious.)
So,as I said, pandemic brain means who knows what kind of editing effort this story will really need, but I wrote a thing that I really love.  I wrote a thing I am somewhat excited to edit.  (I hate editing a lot.  I know it's a necessary step.  I agree that it needs to happen.  But you can't make me like it.  Some people hate drafting.  I love drafting.  I hate editing.)
And while the NaNo community felt a little different this year, it was still great.  The folks who were able to make time for more screen time this year were much appreciated.  And those who weren't but still plugged away on their stories are fab too. 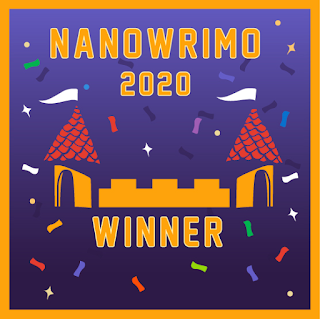