7 Things About Aloha to You 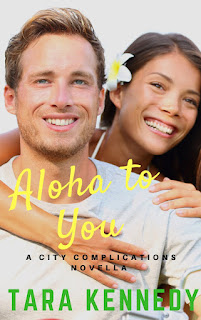 Hey, so, in case you haven't heard, my novella Aloha to You is now available at an etailer near you:  https://books2read.com/u/4XZnd6
1. Seth is an aspiring journalist stuck in a job he doesn't like.  So he accepts the chance to do a fluffy interview with a woman who had a decent social media following.  Adriana is a DC-based lei maker who has crafted a life both on and off social media.  They have very different appoarches to life.  And they can't stop thinking about each other.
2. The novella kicks off my City Complications series, but each story will feature it's own couple, so while their may be easter eggs that are more amusing to those who have read everything, feel free to start anywhere.  (Once the others are out.  Right now there's just one, so easy peasy.)
3. Content note:  This story contains a character dealing on page with anxiety and somewhat controlled panic attacks.  As always, it will not be the best story for everyone to read right now.  Also this one does contain on page sex.
4. I have been accused of being contrary, which seems unfair and incorrect.  But the germ of an idea for this story did come to me as I was thinking how I would probably never write a royalty story because I'm not that interested in contemporary monarchies and then I realized I could write about someone who was self-declared princess on social media.
5.  Another thing that will not surprise long time readers is that I really thing the world needs more stories about the people who live in DC who are not politicians.  So here you are, two folks, living in DC, making plans based on metro, and neither one of them is a politician.
6.  I have a love/hate relationship with instagram myself.  But in thinking about what kind of people would really love Instagram or similar sites, and why they would find it a great and useful tool, I won't tell you I learned to love Instagram, but I appreciated why it's so popular with so many.
7.  Also, if your brain is subject to hearing titles in song, and you hear Aloha to You to the tune of Michelle Branch's "Goodbye to You", well you are not alone.  If you don't, well, that's fine too.
Also, some of the folks I followed on Instagram for flower inspiration include @hakumaui, @helemelehi, @hawaiianleicompany, and @floraforager
1.
111111
1
H
Posted by RandomRanter at 1:22 PM