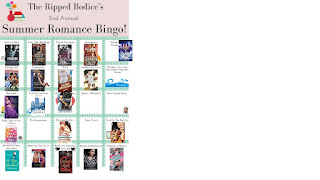 I did Ripped Bodice Bingo again this summer, and this year, I actually remembered to submit.  I did not fill in the whole board.  I ended up reading a lot of historical that I had lingering in the TBR in search of carriage sex, and then kept finding other qualifications, so would read another.  I also read two that would have been perfect in May but had nothing queued up fill in those slots.  And one of these books was also the Romance Book Group pick for the Politics and Prose group, so that was nice.  There were no books I completely hated, there were certainly some (that I have indicated) that I would not recommend whole-heartedly just because there was some alphaholes or some dated jokes about gender stereotypes and such.  It was a lot of fun, and while yes, a couple of these books were purchased just to fill a spot, most I already had in the TBR, so it was a good chance to get to them.
Crossing Hearts by Rebecca Crowley - soccer, older heroine
Lone Star Cinderella* by Maureen Child - fairytale retelling
My Favorite Mistake* by Chelsea Cameron - forced proximity
Heat Exchange by Shannon Stacey - firefighter, older heroine
Savage Blue by Zoraida Cordova - YA Paranormal, mermaids
Destiny's Embrace by Beverly Jenkins - Buggy sex
Bay Side's Most Unexpected Bride* by Kerri Carpenter - fashionista, forced proximity
Seal Camp by Suzanne Brockmann - camp, damsel in distress
Running with Lions by Julian Winters- soccer, enemies to lovers, summer camp
The Harlot Countess* by Joanna Shupe - birds, mermaids, enemies to lovers, carriage sex, damsel in distress
Whiteout by Elyse Springer - forced proximity, extreme location
Contracted Defense by Piper J. Drake - HEA
The Sun is Also a Star by Nicola Yoon - will be a movie
How to be a Proper Lady by Katharine Ashe - hero smells like man, birds, carriage sex, forced proximity, birds
When Dimple Met Rishi by Sandyha Menon - tech in the big city, summer camp
The Kiss Quotient by Helen Hoang - heroine older, fashionista, smells like a man, tech in the big city
The Surgeon's Secret Baby by Ann Christopher - Baby on cover
Forbidden Rose by Joanna Bourne - birds
The Viking Queen's Men by Holley Trent - return to hometown
Heroine Worship by Sarah Kuhn - damsel in distress
Not used, but also would have worked:
Forget You by Nina Crespo - HEA
Falling for the Right Brother by Kerri Carpenter - smells like a man
Rogue Hearts - Anthology - Return to Hometown
Love is All - Anthology - smells like a man
Cities: A Novella by Carla Guzman - time travel
The Ruin of a Rake by Cat Sebastian - Queer Historical
*gender sterteotype jokes
*alphahole behavior, rape jokes
*homophobic stereotype joke
Posted by RandomRanter at 9:34 AM